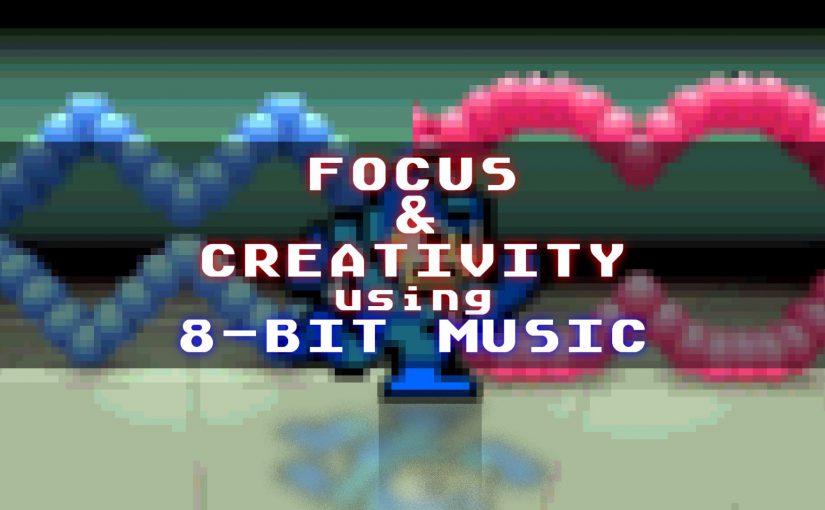 So, you want to focus and be creative? What is it that you are trying to do? Studying? Programming? Designing? Problem Solving? Innovation? Repetitive Donkey Work? (like most jobs?)

Look no further, for we may have found the right booster for you.

Why? How? Let’s get right into the details.

So, how can 8-Bit chip-tune music actually help in focus?

If you think the old days game music was some form of random generated, not well-thought-out creation.. please try again.

In fact, game music is designed in such a way so that it can be enjoyed in both foreground and background contexts. It can be enjoyed as a solo masterpiece but also as a background theme having audible room for simultaneous game world sounds occurring.

Even further, the music itself tries to keep the player alert and to the point on what he or she is actually trying to accomplish without distracting from the cause but assisting due to its repetitive pattern which slowly grows on and embeds to your brain.

Chip-tunes at their core have repetitive note patterns which are pretty catchy. Music and generally sound on its own can mask undesirable distractions; a good thing. However, up-beat non-distracting mainstream music is hard to find since its purpose is not to focus on doing something else but to pay attention to itself.

The repetition of 8-bit-like game music assists in becoming second nature. Its tempo can keep you in a loop of feeling alert, motivated and on the path of achievement while not necessarily telling you anything specifically you are supposed to do or feel.

If there’s one thing missing from modern game music is the emphasis on an epic, emotional and catchy theme to seal the deal of a polished production. Unmemorable themes, which probably even cost more to produce, but no distinctive character.

Lyrics usually shout: “Pay attention to what I am saying”. This is distracting.

In chip-tune music, there are no such obstacles. Maybe some modern vocalizations but still they participate as instruments rather than as lyrics.

So, how can 8-Bit chip-tune music actually help in creativity?

In case you don’t know by now, no matter what they tell you or you tell me, emotion is a very powerful force – in every single context. Just because we are conditioned to transform it, mute it or even kill it to get things done as we are expected to does not mean the underlying force is there..

Why do I suddenly sound so Darth Vader-ish? Totally unintentional.

Nostalgia is another driving force of emotion. It can be an uplifting force and in fact motivating to recover that childhood and carefree energy lost through the years or worldly trouble and disappointment..s.

8-Bit chip-tune means nostalgia. You do the math. Period.

Exit the Low | Enter the Higher

Has anyone been listening to the borderline constant garbage being shoved down our.. ears on the media with polished mainstream music glorifying selfishness, sex and money? Oh, are you offended? Good, cause all that is conditioning and numbing our creative spirit along with our endless possibilities; we should all take heed.

8-Bit chip-tune music is further from this reality and closer to fantasy and generally thinking outside the box. That can assist in escaping the density of daily life, connect you with other creators, the composers, and in turn help you tune in to a higher, ethereal thought realm.

Scared of going “crazy”; How about “socially unfit”?

How to be more productive when you study: the 8-bit secret